Pets can injure their legs in many different ways, from a road accident to jumping for a frisbee, or getting their paw caught jumping a fence.

Whatever the situation, we are here at Marshalswicks veterinary surgery to help your pet recover quickly. Whether their injury needs diagnosing, surgery or rehabilitation, we have all the specialised facilities our experienced team need to give your pet the best chance of early recovery.

One of the most common injuries your pet may sustain is a torn cruciate ligament and we are ready to help. One of our special treatments – cruciate ligament repair is a surgical procedure that will help your pet recover from their injury and back to their playful ways as soon as possible. 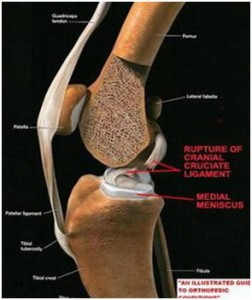 Why does the CCL rupture?
Unlike human athletes, rupture of the CCL in dogs is rarely the result of a traumatic injury. Rather, animals tend to experience CCL “disease”, meaning that the ligament degenerates or weakens over time due to genetic, conformational, and/or immune mediated processes within the joint. The weakened ligament may partially or completely rupture following activities such as running or jumping. Unfortunately, the condition leading to CCLR is often present in both knees, and about 30- 50% of dogs will rupture both CCLs within 1-2 years of each other. CCL rupture is one of the most common orthopedic disease seen dogs, and CCL repair is the most common orthopedic surgery performed by veterinary surgeons.
Are any other parts of the joint affected when the CCL ruptures?
Quite often, yes. The medial meniscus (MM) is a fibrous pad attached to the top of the tibia that acts as a cushion inside the joint (there is also a lateral meniscus, but it is less often injured). The MM can be injured at the time of CCLR, but is more often damaged after prolonged instability of the stifle joint. Without the support of the CCL, the femur puts abnormal pressure on the MM which can lead to tearing or shredding of the meniscus.
What signs will I see if my dog ruptures a CCL?

There are three potential scenarios that can occur with CCLR: acute rupture, chronic rupture, and partial tears.

Following an acute rupture, your dog will likely be painful and partial to non-weight bearing lame in the affected hind limb. The lameness will likely improve over the next several weeks, however a sudden worsening may be seen if the MM becomes damaged, and your dog will not return to normal function without some evidence of lameness. An audible clicking or popping may be heard if the MM is torn.

With chronic CCLR, an inciting incident may not have been noticed, but persistent lameness is evident. Over time, the body tries to stabilize the stifle by surrounding the joint with scar tissue. This will look like a swollen knee and range of motion of the joint may be compromised. Arthritis will develop inside of the joint as a result of chronic instability.

Partial CCL ruptures are less obvious—your dog may appear lame with exercise, but improves with rest. However, the ligament will continue to weaken and the joint will become increasingly unstable. Eventually, the ligament will likely rupture completely and lameness will not improve with rest.

How will a we diagnose a ruptured CCL?
The diagnosis of CCLR is typically based on the presence of the “cranial drawer sign”. In order to feel this, you dog will be placed on his/ her side, and the vet will feel the knee for cranial drawer motion. This procedure is not painful; however, some dogs may be too tense to allow thorough palpation. If this is the case, a sedative may be given in order to complete the examination. Patients with chronic ruptures associated with a large amount of scar tissue and arthritis may not exhibit cranial drawer. Other signs of CCL rupture include “medial buttress” (thickening or scarring on the inside of the knee), and “tibial thrust” (another method to check for cranial displacement of the tibia). X-rays will also be taken in order to rule out other potential causes of hind-limb lameness and to evaluate the extent of arthritis within the joint.
What Happens if the Cruciate Rupture is Not Surgically Repaired?
Without an intact cruciate ligament, the knee is unstable. Wear between the bones and meniscal cartilage becomes abnormal and the joint begins to develop degenerative changes. Bone spurs called osteophytes develop resulting in chronic pain and loss of full joint motion. This process can be arrested or slowed by surgery but cannot be reversed. 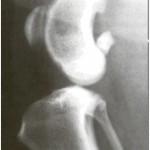 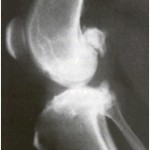 What are my treatment options?

Surgical stabilization of the stifle joint is the treatment of choice for complete CCLR in dogs. In addition to surgery, physical rehabilitation will be recommended.

There have been many different procedures described in order to treat CCLR. No procedure completely halts the development of arthritis within the joint, but surgical stabilization is believed to result in better functional results than conservative therapy alone. The success rate with surgery is about 90% (meaning that most dogs return to good or excellent function following surgery and proper post-operative care).

Currently, there are three procedures recommended and performed at the UFVH. Regardless of the stabilization procedure, the stifle joint will be explored, “cleaned out”, and the MM will be examined and removed if damaged.

This procedure attempts to mimic the functions of the CCL by placing a heavy gauge suture across the stifle joint in a similar orientation to the normal CCL. The suture is placed on the outside of the joint (extra-capsular). Outcomes are very good in dogs weighing less than 15-20kgs (and in cats). It is possible to perform this procedure on larger dogs; however, the results are not as predictable and breakage of the suture may be more likely.

The TPLO changes the mechanics of the stifle joint rather than attempting to replace or mimic the CCL with a graft or suture. The tibia has a natural slope, and an intact CCL prevents the femur from “sliding” down the slope when a dog bears weight. When the CCL is ruptured, the femur is free to slide down the slope, or in other words, the tibia moves forward in relationship to the femur (cranial drawer) when weight is placed on the affected limb. In a TPLO procedure, the tibia is cut (osteotomy) and rotated in order to flatten the tibial plateau (the top or joint surface of the tibia) and prevent the femur from sliding backwards. A plate is applied to the inside or medial surface of the tibia to stabilize the osteotomy.

Like the TPLO procedure, the TTA changes the mechanics of the stifle joint in order to counter-act the abnormal forces placed on the joint following injury to the CCL. This is the latest surgical procedure designed for treating CCL ruptures and surgeons who have been performing TTA’s have been very satisfied with the results.
In order to change the joint mechanics, a cut is made in the tibia along the front edge (cranial surface) where the patellar (knee cap) ligament attaches. This segment of bone is advanced a pre-determined distance and stabilized using a titanium plate and screws.

Advantages of this procedure compared to the TPLO include a smaller, less invasive cut in the
bone at an area that is not directly involved in weight bearing, earlier post-operative weight bearing, and potentially less severe complications. The primary disadvantage is lack of long term studies comparing this procedure to the TPLO and extra-capsular suture. Dogs do tend to bear more weight on the limb earlier in the recovery period; however, strict exercise restrictions must be followed similar to the TPLO.

A new material has recently come into veterinary use. It is a titanium sponge called Orthofoam that allows bone to grow into it creating a secure and permanent bond with the bone.

Cut into precisely measured wedges it is the ideal companion for the TTA procedure filling the wedge, completely and providing a very strong resistance to the wedge space collapsing. It is held in with a single pin and a special titanium orthopaedic staple. In recognition of the first human surgeon Dr. Maquet who first provided a similar procedure for his patients in the 70’s the procedure is the Orthofoam MMP TTA (Modified Maquet Procedure Tibial Tuberosity Advancement.

What will need to be done before my dog can have surgery?
X-rays must be taken prior to surgery. If x-rays were taken at your regular veterinarian, the films may suffice for dogs having extra-capsular repairs. A special view is needed for dogs having a MMP or EXTRA CAPSULAR, so it will be necessary to have x-rays taken here. Prior to anesthesia, routine blood work will be performed.
What will the recovery process be?

You will receive detailed instructions at the time of discharge from the hospital regarding post operative care. Regardless of the procedure, your dog will require at least 3 months of exercise restrictions. This will mean lead walks only (no free roam of the back yard), no running, jumping, or rough house play. However, physical therapy and rehabilitation will be essential and a detailed program will be outlined for you and your pet. This will involve leash walks of increasing duration and intensity along with therapeutic exercises to strengthen the muscles of the affected leg as well as the core stabilizing muscles. Most dogs are allowed to return to normal activity after 3-4 months (only once the bone has healed completely and the muscles have been rebuilt). Failure to follow the exercise restrictions dictated in the discharge instructions could result in severe complications necessitating further surgery.

The skin sutures or staples will need to be removed 2 weeks after surgery. Recheck appointments at the Small Animal Hospital will be required at 4-6 weeks and 3 months after surgery, at which time x-rays will be taken to assess bone healing if a MMP or EXTRA CAPSULAR was performed.

Enhancing recovery post-operatively is largely about strict confinement early. This cannot be over-emphasized. Be prepared to crate your dog our employ a pen such as a child's playpen depending on the dog's size. A corral of sorts can be constructed with boxes and a baby gate. Be sure you understand the instructions with regard to gradual return to exercise over several months.

A series of cartropen injections can help with joint inflammation as well as lubrication. Typically injections are given once a week for a total of 4 injections.

Oral joint supplements such as glucosamine contain cartilage building blocks to help the body repair cartilage damage. This is an excellent time to begin supplementation and there are numerous brands. For more details, click here.

Nothing compares to professional rehab for return to function. If you are lucky enough to have such a facility in your area, consider utilizing their services. A list of home exercises may be obtained and/or the dog can visit weekly or a few times weekly for exercise and treatment. Some facilities allow the dog to board and have daily treatment. Ask your vet about this option.

What are the potential complications of surgery?

Any time an animal (or human) undergoes anesthesia there is the risk of adverse reactions to anesthesia, including death. However, blood work is performed prior to anesthesia in order to identify any underlying medical conditions which may influence anesthetic choices. In addition an extremely experienced staff of nurses here at Marshalswicks veterinary surgery will take exceptional care of your pet.

Complications associated with surgery are uncommon and include excessive bleeding, infection, fracture of the tibial crest or fibula, and surgical implant failure. It will be essential that the post-operative instructions be followed precisely in order to prevent surgical site infections (usually due to dogs licking the incision), failure of the suture or implant (breakage of the suture or TTA plate) or fracture of tibia.