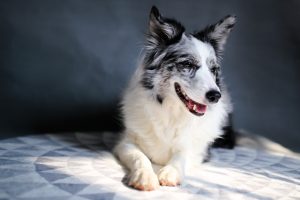 Castration is a routine surgery and is relatively straight forward. The procedure involves making a small cut just in front of the scrotum and removing both testicles through it. The scrotum is left in place, however will shrink during the few months after the operation. The procedure usually takes around 15 minutes. Afterwards your dog will be given a buster collar and pain relief to go home with, for some well earned rest. The stitches are either removed 10 days post op or dissolve at which point your boy is completely back to normal and generally completely oblivious to what has happened. Most of our castrates are very happy to come back in for some treats at their post op check. We recommend to castrate your male dog at 5-6 months old, however please chat to us about your specific dog as this time can change depending on breed.

Castration removes a dog’s testosterone source. Testosterone can cause a multitude of problems in male dogs:

Testicles, like any organ, are also prone to developing tumours. These tumours tend to be benign and not spread, however some can be hormone producing and thus turn malignant – read our article about cryptorchidism for more information. Any testicle can develop a tumour, not just retained ones!

Overall, we recommend to castrate male dogs, especially if they are showing signs of aggression or unwanted sexual behaviour! Additionally, the longer castration is left after the recommended six months, the more likely these behaviours are to become learned rather than hormonally driven, and thus more likely to continue after castration. If you are unsure as whether to castrate your dog however, and are keen to breed from them, remember BPH and testicular tumours can be resolved most of the time through castration later in life.